WOKO – from WOhnbauKOmmission (housing commission) – was established in 1956 by students from the two Zurich universities. In 1972, this became today’s cooperative: the Student Housing Cooperative Zurich, WOKO. Its members are legal entities, particularly organisations of students (VSETH and VSUZH), of doctoral students (AVETH) and of former students (ETH Alumni, Zürcher Universitätsverein ZUNIV).
To mark WOKO’s 50-year anniversary, its history from the beginnings to the present day was compiled and published in 2006.

WOKO administers both property belonging to the Stiftung für Studentisches Wohnen (Student Housing Foundation) Zurich, property owned by the ETH Zurich and property owned by the University of Zurich. WOKO also rents entire properties owned by the city and canton of Zurich and by private individuals and lets these out to students. WOKO owns only one property itself. In the case of all properties, WOKO lets the rooms, collects the rent, organises caretaking, operation and maintenance and is also responsible for bookkeeping and financial control. It also develops and supports new student housing projects.

WOKO receives neither subsidies for the operation of its student houses nor assistance to cover deficits. As a private organisation, WOKO is itself responsible for achieving balanced financial results. It is only possible to keep the rent charged for rooms low thanks to the fair terms given by property owners, to efficient and inexpensive administration and if student tenants pay their rents on time and behave in a manner that does not increase costs. 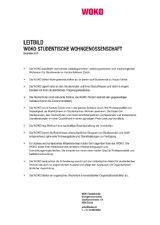 WOKO lets about 3'500 rooms in Zurich and Winterthur in student houses and individual apartments. Accommodation is available exclusively to students enrolled at the ETH, University of Zurich, ZHAW and other institutes of higher education in Zurich. WOKO does not act as an agent for apartments and rooms, but lets accommodation which it administers itself and for whose maintenance it is in most cases responsible. Please see Cooperative for further details.

As a rule, WOKO lets individual rooms rather than apartments. Students live in groups of 2 to 15 tenants with joint use of kitchen and bathroom. They arrange autonomously amongst themselves how they structure living together. Most rooms are let furnished. In addition to the cost of room, furniture and furnishings, the rent paid normally includes all additional costs such as the students’ individual electricity consumption as well as cleaning agents. Depending on the property in question, tenants are also entitled to make use of music rooms, house bars, workshops, etc. that are used jointly.

Members of the cooperative